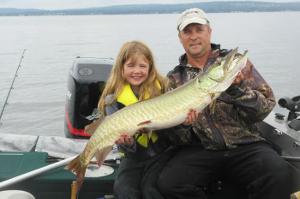 In the early spring of 2013 I received a call from Captain Wes Winters from Long Island New York. Wes and his 9 year old granddaughter Julia Ketner were on a quest for a IGFA female small fry world record musky. The duo had tried on numerous occasions but had not been able complete the task. They decided to give guide Todd Young a try on Chautauqua Lake. The duo arrived at the lake the evening of June 30, 2013 and were ready for their trip on July 1st. After a quick rundown on our plan of attack for the day and a little practice for Julia getting the rod out of the rod holder I knew she would do just fine, all we needed now was a strike.

The morning started out cold, windy and rainy with storms in the area. We found an area loaded with baitfish up high in the water column but lightning strikes were approaching and we had to run for cover. We were able to get back out on the water after a short lunch-storm break and quickly motored back to the area.

After getting only 3 trolling rods set the drag started to rip out of not one but two of the rods. Yes we had a double! Julia was hooked up and it seemed to be a good fish. The fish on the second rod jumped and cleared the water buy a foot or so and threw the lure…it was a mid 40 inch fish. Julia was still hooked up. After a couple good runs and some nice head shakes the fish was at boat side and Todd was able to slip it into the net.

Julia’s fish measured 43 3/4 inches long on an official bump board and weighed 19 lbs. 13 oz. on the IGFA certified scale. Julia had shattered the record by over 7 pounds. After some quick photos the fish was released to be caught another day. Three months later we got verification from the IGFA that Julia’s fish had passed all the tests and Julia was indeed the new IGFA Female World Record holder in the Female Small fry Division for muskellunge. Julia’s fish was caught on a Wiley Lure that was over twice her age.

Congratulations to Julia and her grandpa Wes Winters on the World Record and a day they and Todd will never forget!

We offer a variety of trip packages.