This 17.5 mile long natural lake covers over 13,000 acres and is located in southwest New York. Musky management and culturing was born at Chautauqua Lake in the late 1800s. The waters of Chautauqua are still managed to this day and the lake has the fish to prove it. Chautauqua Lake is definitely recognized as one of the world premiere musky fisheries. Our guide, Todd Young, is licensed by the NYSDEC and has over 35 Years of experience musky fishing Chautauqua Lake. He caught some of his first muskies in these waters in the late 1970s and considers Chautauqua his favorite musky water. Todd has numerous tournament wins on the lake and truly enjoys Chautauqua’s versatile fishery. Many fish are caught by casting Chautauqua’s beautiful extensive natural weed beds. Trolling the deep waters in the northern basin and the shallow flats in the southern basin can also be very productive. Chautauqua Lake gives up both numbers and trophy fish on a regular basis. Musky season runs from the last Saturday in May through November.

Call or Email us to experience some of the best musky fishing in the U.S.

In-Fisherman magazine recently highlighted Chautauqua Lake and Muddy Creek Fishing Guides in their annual Pike and Musky edition issue as one of the top 10 musky destinations.

Is the day booked you wanted to fish? Don’t Worry!

You Will Need to Bring 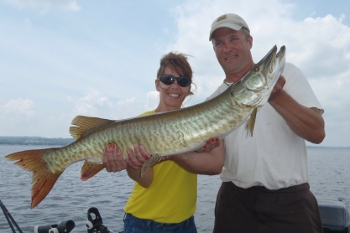 Muddy Creek Guides offers seasonal musky trips on a variety of lakes in Western Pennsylvania. Todd has spent many days targeting muskies on many PA lakes. These trips will be very educational and will help get you started on your quest to catch the elusive musky. Pymatuning Lake in Crawford County is known for producing some of Pa’s largest muskies every season. We always have a chance to land a true giant at Pymatuning. Moraine State Park / Lake Arthur in Butler County can also be a productive musky fishery. We will fish a few other small western PA lakes at certain times each season.

Please Call or Email us to discuss some Pennsylvania’s musky fishing options.

You Will Need to Bring

Musky trips are Catch and Release only